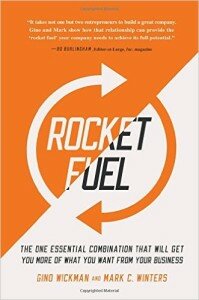 It’s no secret that I love what the Entrepreneurial Operating System (EOS) offers to companies – it’s like a playbook for how to run a business. The guy who helped me learn the system is Duane Marshall, and he’s got a webinar on Thursday, July 9th, 2015 at 7 pm Eastern where you can learn more about EOS way of building a business in a systematic and humane way.
At the webinar, Duane will be presenting the new EOS book titled: Rocket-Fuel – The one essential combination that will get you more of what your want from your business. I’m looking forward to reading this latest book in the series and encourage you to check out the webinar.
And yes, as a fellow entrepreneur, I know that your time is precious. I also know the EOS system is one of the biggest game-changers for entrepeneurs in creating more time. My only regret about implementing EOS it is that it took me so long to pick up the first book and understand why so many of my colleagues were recommending the system. Lucky for you, they have webinars now, so you don’t even have to read the book. ;-)
To register,  () and prepare to start thinking differently about your business.
To your success!
-Catherine

When you’re running a successful startup, chances are you’ll wake up one day and realize you’re in second stage.

In our case at Pure Visibility, we reached a point where we seemed to be “too old” or “too big” to qualify for assistance from most of the entrepreneurial organizations we knew. Apparently we weren’t a sexy startup anymore, but it sure didn’t seem like we were a “grown up” company either! That might have been a clue that we were entering second stage except we didn’t yet know it existed!

Along the way our friendly SBTDC advisor, Charlie Penner, advised we enter the Companies to Watch business competition sponsored by the Edward Lowe Foundation for second stage companies. Though we still didn’t know what a second stage company was, we met the competition criteria and gave it a shot. We applied and eventually earned a spot in the Michigan 50 to Watch.

At that point, the second stage moniker didn’t seem to mean much, but we played along and attended the free Foundation training offered to Companies to Watch from around the country. I’m glad I went – it was an amazing experience.

Some time later the term second stage began to mean something.

Systems that used to work were getting in the way. There seemed a sudden need for “policies”. Delivering the same level of customer service was getting harder instead of easier.

Suddenly the whole second stage thing didn’t seem so academic. We were in it!

As it turns out, the process of discovering resources for second stage companies was, and continues to be utterly fascinating to me. Fascinating, and frustrating. Frustrating that there doesn’t seem to be a more coherent network of support for businesses in this same stage. It shouldn’t need to be such a process of discovery!

I’m on a mission to change that. I believe that helping companies successfully move Beyond Startup is critical to economic growth in our state and throughout our country. On this process of discovery, I’m meeting amazing people along the way. Here I’ll share those stories, and do my part to make resources more readily available to second stage entrepreneurs and companies beyond the startup stage.

Explore articles on this site

We invite these referral partners to participate here as companies we know and use. They make this content possible - thank you!